As head of Image Streams, Bob is the technical-planning guy putting all his DP and exec-producing expertise together to help ensure that productions run like a Swiss watch.  As a veteran of shooting in almost every US state and over 25 countries on six continents, he knows just how well nothing beats great planning.  His motto: the drama belongs in front of the camera, period. 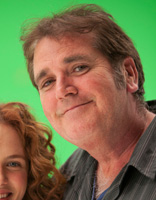 Producer Kevin Stofer Smith started his career as a rock and roll photographer while at Palisades High School. Then becoming a studio stage manager (at what is now Raleigh Studios), he developed lifelong relationships with dozens of directors and crew members, many of whom now work on A-list features. As a first assistant director and later producer, he’s worked on locations around the world with top commercial directors and companies. From there, he moved into features. A master of multitasking and problem solving and scheduling, Kevin ensures that productions run smoothly and on schedule. He has produced projects for Image Streams for over a decade.

Kevin’s other great strength is personality: he radiates enthusiasm and positive energy throughout production offices and on set, contributing to a relaxed, comfortable atmosphere in which everyone is valued and creativity flourishes.